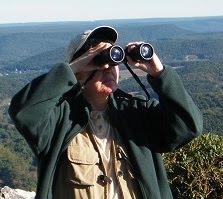 Two days after the first nor'easter of the 2020 winter season, I was bundled against the 18 degree (F) cold (14 outside) as I sat on my enclosed porch, waiting for the birds to show up at the three seed and one suet feeders I had put out the morning before as the snow was winding down. With 10 inches of snow on the ground I had left the feeders out overnight, figuring the bears were finally taking a winter nap.

The first birds to arrive were two chickadees. One would fly to the feeder that has a cage surrounding the seed tube. The other would fly over and the first one would fly away until the second fed and left. Obviously, a pecking order at work, but how do they know which is the leader?

A female cardinal came to the open, house-shaped feeder but when a male flew to the other side of the feeder, she flew to a nearby bush. Usually cardinal pairs don't act this way - they share the feeder - but when a second male cardinal flew in and the first one chased him off I wondered which one, if either, was the female's mate.

Later, a male redbellied woodpecker came to the house feeder. He took a seed, flew to a tree to crack it open to eat, then came back. He completely ignored the suet feeder hanging on the other arm of the pole. After a couple of passes he realized there was a long, perchless feeder encased in "squirrel-proof" metal (squirrels might not get in but I have seen them hang on, if they can jump over the baffle). He flew over, grabbed the metal and was in a more natural position to get seed without having to twist himself around, as he did at the house feeder.

Meanwhile, a smaller male downy woodpecker was enjoying the suet. A female downy (the females don't have the males' red spot on the back of the head), which I had seen on the suet when it was hung on the other feeder pole before the storm, also used the long feeder rather than look for the suet. Was she put off by the male or did she not see the suet?

Finally, a male white-breasted nuthatch came to the house feeder at the same time as a female (whose head has a gray crown rather than a black one). She stayed on the feeder roof and watched the male, waiting for him to leave. Didn't she see the other side was open for her?

I mention all this because at several points I wondered what these birds could be thinking.

We use the term "bird-brained" to connote a human who is none too smart. But birds have proportionally large brains compared to their overall body and head sizes. With those brains they can remember where they have cached food, where they can find more food (such as my feeders) and how to adapt to situations.

The first time I used my long feeder, before I realized I needed a pole and a baffle to keep out the squirrels, I hung it in the pear tree in front of my screened porch. I noticed at several points that winter some of the juncos, a black and white relative of the sparrow family, would grab hold of the metal and get a seed. Without a perch, this was not a natural position for a sparrow. But a few of these had figured out they could get the food without competition from the others foraging on the ground.

Birds are also smart enough to know how to find the proper roost hole in winter and the materials to create nests in summer. Each Spring robins poke around my ornamental grass garden to take the cut grass I haven't picked up. Other birds have gone into the compost pile if there is suitable material for a nest. Somehow they have learned how to do this from their parents. And, of course, the birds, including the previous year's nestlings, somehow remember how to get to their wintering grounds every Autumn and how to return to their breeding grounds every Spring.

Many have written about the intelligence of certain birds, or try to analyze why they do what they do. Especially now, during the time of coronavirus when people desperate to be out of the house are suddenly discovering the birds around them, this is a popular field.

Among the most intelligent of the birds are the corvids, including ravens, crows, jays and magpies. Corvids are among those that know how to use tools. They have an assortment of vocal sounds that mean different things, a type of language. Naturalist Bernd Heinrich was so fascinated by ravens and crows he wrote a number of books about them.

In researching this blog post I learned scientists turned to grackles to learn how often a bird blinks in flight. It never occurred to me a bird could blink, but I am not surprised grackles were studied. Grackles know how to forage, as I know when there is an invasion of 100 of them in my yard and my neighbors' several times a year. Grackles, like other blackbirds including orioles, are very intelligent. Grackles have learned that after mating season is over there is safety in numbers and more eyes mean a better chance of finding food.

So are birds smart or silly when they fight over one side of my feeder while the other side has nothing in it, or when they ignore a feeder that might provide them an easier way to eat? My human brain isn't smart enough to provide an answer.